October 9, 2018 Posted in News, Slots by admin • No Comments
Online casino enthusiasts have six new options to choose from when it comes to virtual slots. These are engaging and visually appealing games with a simple set of rules and a simple play method.

Play Slots at these Online Casinos

Tiger Rush is one of the new video slots options available and it boasts a unique visual design to occupy the player’s eye while they try to win big. It’s art theme is tiger based as the name suggests, but it has a unique spin to the typical art style used to depict tigers in slot games. It uses a beautiful Asian art style that fills the game with painting-like images of tigers and Asian objects. It’s visually captivating and it has a solid payout system. It doesn’t boast an exorbitant jackpot, but it does allow a max of one hundred and seventy five dollars on ten cent bets. The player can bet between ten cents and ten dollars per line and there are ten lines on a typical game while some have twenty five.

Jaguar Temple is a sought after option due to the developer’s reputation for making high-quality slots with visual appeal and a great winning potential. The game is made up of five separate reels and a grand total of twenty lines to bet on. Wagers start out at ten cents for the minimum bet, but players can choose to bet in increments all the way up to $100. The art for the game has an ancient South American treasure theme and features stunning visuals.

Yeti: Battle of Greenhat Peak is a slots game for those who want a little comedic relief. The art theme doesn’t try to be serious and instead aims to put the legendary Yeti up against a humorously dressed man. It’s cartoon-like in nature and the funny aspects carry over to gameplay with a feature called Wild Attacks that gives away free spins and other prizes. It’s also one of the higher paying slots. Over $3000 dollars can be won with this game on a single spin. The payloads are also locked. So, players always have eleven lines. 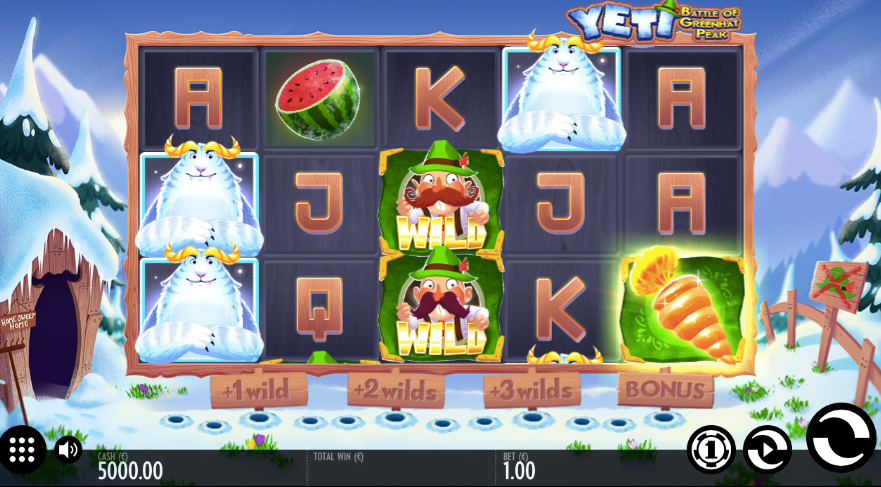 Wild Heist at Peacock Manor is a less conventional game. It gives players seventeen lines on five reels for every game and that layout doesn’t change based on the player’s bet. Bets are fairly standard and start at ten cents and max out at $100. The art style is as unique as the layout, though. It’s Heist themed with a hand drawn appearance that’s not dissimilar to a dark children’s animation. Wild Heist at Peacock Manor also introduces a variety of enticing wilds and a card based minigame. The max jackpot isn’t available for the purposes of this article, but it’s definitely a game to try out.

Bork is coming back. The original game featuring Bork the Berserker has been unavailable for awhile now, but Bork the Berserker: Hack and Slash Edition is a great replacement. The game follows the Nordic warrior Bork as he attempts to save a princess from an evil sorcerer. The game has the impressive payouts and gameplay of the original, but it has a few improvements, too. Now, players can get up to twenty free spins from the sorcerer. It’s definitely a great feature to help players extend their play time a bit.

One of the highest paying slots around, The Falcon Huntress provides players with just nine lines. However, even though there is less chance to win, a good spin can result in a massive $50,000 payout. The theme is also impressive. It has Mongolian art work and centers around hunting with falcons.

About Low Deposit at Online Casinos