Rating:
There has been a recent trend where superheroes from the past and present have been immortalised through films and TV shows. Bally Technologies decided to follow suit and create a slot game for the iconic series Wonder Woman which stopped airing in the 70’s. The Wonder Woman character is still very popular, and Bally Technologies decided to grab this opportunity by the scruff of its neck.

The game is available on mobile, tablets, desktop and laptops. It captures the popular sitcom excellently through its stunning visuals and takes the players back in time. The game has five reels and 40 pay lines.

On the left-hand side of the game is a picture of Wonder Woman. The stars on her outfit and all over the background are very noticeable. 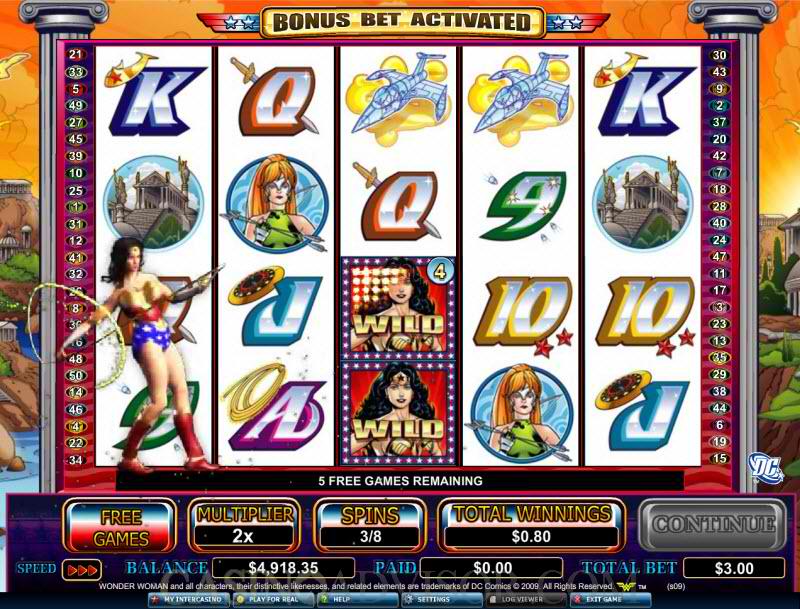 The right-hand side has an orange and purple background with stars spread all over. The right side of the reels contains a button relating to the bonuses and the spin button. There are three jackpots at the top and bright colours everywhere. Each of the jackpots has a start on either side with the major jackpot having a golden star by its side.

Charges per spin range between 40 pence and 200 pounds per spin. In the game, Wonder Woman’s goal is to give the user superhero-sized rewards. There are five additional features in the game. These include an Expanding Wild Feature, three progressive jackpots, a feature where the free-of-charge spins feature can be gotten for a price, the Diana Gold Symbol which can replace a maximum of four low-value symbols, and an additional game feature that can give the user up to 25 spins which are not charged.
The game incorporates music and action scenes from the original TV show creating an immersive experience for folk who used to watch the show which starred Lynda Carter
Mystery Stacks feature

Mystery symbols are replaced with one symbol chosen randomly in the base game before the start of each spin. The only symbols that cannot replace the mystery symbols include the Major Jackpot, Mini Jackpot, Mega jackpot and the wild symbols.
Expanding Wild Feature

In this feature, the player gets to punch his or her way to huge wins with Wonder Woman fighting your corner. Wild symbols appear on reel 2, 3 and 4. After showing up, these symbols expand and occupy the whole reel. The wild symbol can not substitute only the free game and jackpot symbols. A lucky player can benefit from three fully wild reels.
Jackpot feature

This feature has three available jackpots. These are the Mini Jackpot, Mega Jackpot and the Major Jackpot. The higher a player stakes, the greater his or her chances of winning. It is important to note, however, that any jackpot can be won at any level. The symbols for the Mini, Mega and Major jackpot only appear on the first, and the fifth reel and a player can only win a given jackpot if the symbols appear on both those reels simultaneously.
Free Game Bonus feature

Many users favour this feature. Players get to choose their volatility. The feature is triggered when the Free Game symbol appears on the first, third and fifth reel at the same time. Here, a player wins one time his or her stake and can choose three free spins scenarios. These scenarios are:

The highest variance of the three options is the eight free spins are chosen where the Gold Diana symbol replaces four low-value symbols. That free scenario can get a lucky player the biggest rewards.

Bally Technologies outdid themselves when they created this incredible masterpiece. The game gives players numerous bonus features that they can take advantage of as well as the potential to win huge rewards.