Rating:
T-Rex Online Slot
Take a journey back in time, well before the dawn of mankind – about 65 million years back and get ready to meet T-Rex: an online casino slot game developed by Real Time Gaming Casino. The mesmerising world of dinosaurs provides the perfect place to spend a lot of time and a little money, with great odds at also winning BIG.

T-Rex is a 25-pay line progressive slot game that runs RTG’s software platform. The game features many well-known species of dinosaurs with the king of them all taking the spotlight. The terrifying Tyrannosaurus Rex was a wonder among the great reptiles given its size, speed, and strength. This is the concept that is written into the fabric of this game. There is a good reason why T-Rex is one of the top-rated online casino slot games from RTG. 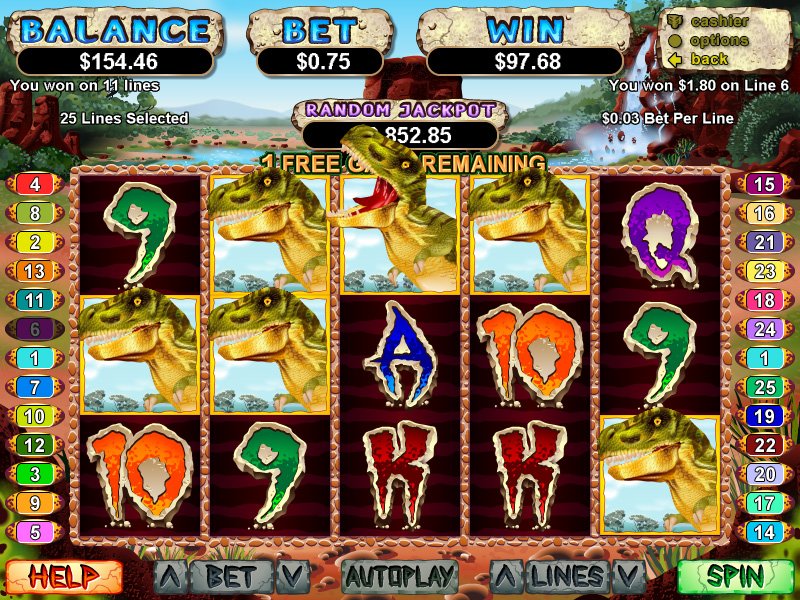 How to Play T-Rex

Before journeying back into the Jurassic era, players are encouraged to modify their bets. Coin values, range from between 0.01 and 5 and can be adjusted by tapping or clicking the “Bet” arrows. The “Lines” button alters the number of pay lines enabled for the current round. Tapping or clicking “Spin” begins the game and the “Autoplay” button allows players to designate a preset number of spins without interruption.

The game’s pick feature is activated whenever three or more egg icons appear on the reels. Players are invited to select an egg to win as many as ten free spins. When the player sees T-Rex emerge on the third reel in the free games, he devours all the dinosaurs onscreen and replaces them with the coveted T-Rex symbols, before prizes being awarded. Best of all, this feature can be re-triggered over and over for even higher winnings.

The game brings with it the opportunity to win a random progressive jackpot that is awarded at the end of every game. A player’s progressive wins are added to the total payout.

Whenever the player uncovers 5 T-Rex symbols on any active pay line, an incredible jackpot of 10,000-coins is awarded.

With 25 lines to play over five reels, players are given many opportunities to find the mighty T-Rex. Other symbols include Jurassic-era plants, active volcanoes, and other species of dinosaurs.

Surprisingly, some stranger elements players are likely to encounter on the reels in T-Rex are not dinosaurs, but classic playing card icons with values ranging from 10 through Ace. They may seem a little out of place, but they are easy to identify and can lead to some excellent payouts in the bonus rounds.

This game’s high level of volatility is sure to appeal to chancers and high-rollers since long strings of winning rounds on free spins is common. Lucky players who hit the wild T-Rex icon can often complete multiple winning combos and can even earn a double payout for the combo.

The wild symbol in this game is, appropriately enough, T-Rex himself. The scatter icon is a dinosaur egg. Hitting on two or more egg symbols on any pay line will trigger wins from 1x to 200x the original wager.

The bonus game in T-Rex offers free spins whenever three or more egg symbols appear anywhere on the reels. When this feature is activated, the player will need to choose which egg to hatch. The eggs contain free spin as an extra added reward during free play. Any T-Rex symbol that appears will take devour the other dinosaur symbols, creating more chances for players to hit a big payout.

Like most RTC games, T-Rex immerses players into an exciting virtual world that offers the opportunity to hit sizable random progressive jackpots. While it doesn’t provide the biggest possible payout in online slots, the chance – and challenge – to win big is one that seasoned players will appreciate. Its impressive visuals and audio will capture and hold the interest of more casual players and offer everyone an enjoyable gameplay experience.