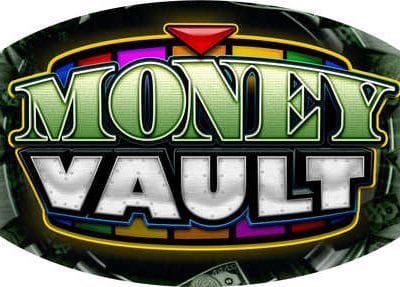 Rating:
The Money Vault Slot casino game by Bally Technologies is centred around money. While the game does not have individual pay lines, it does have 243 different ways for players to win. This big money casino game includes symbols of giant diamonds, bulging cash vaults, and stacks of gold coins.

Wagering on the Money Vault Slot casino game is a bit different than other on some other slots since it lacks the individual pay lines. Betting begins at .01 and maxes out at 40 coins. This means that the wagers placed on this game are very straight forward without having to do the math to see how much money is being spent on the round. At the bottom of the game, screen players will find all of the information needed to play the game. The players account balance is on the right. Next, to that players will see an I which stands for information. This is the button to push to find out all of the ways that wins are calculated. The rules of the game are also found under this button. The rest of the buttons found in this area of the screen are pretty self-explained. 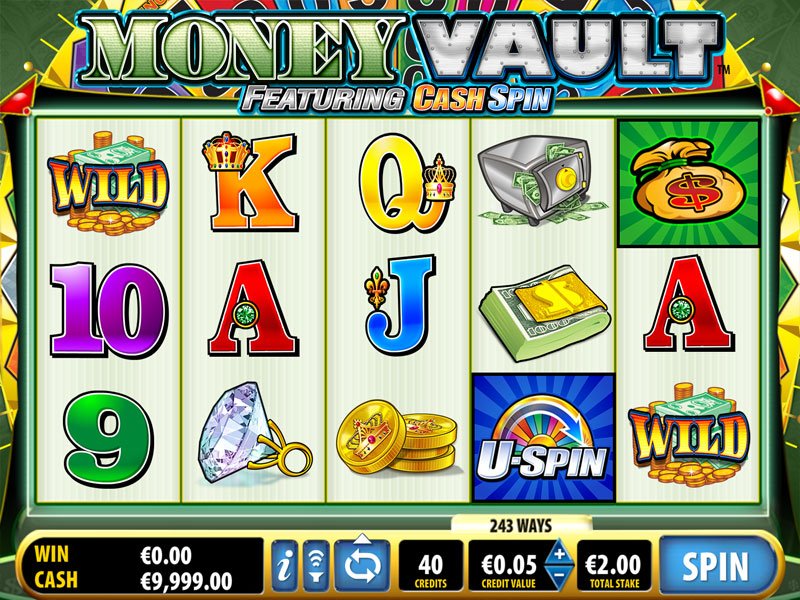 The Money Vault Slot casino game has a big feature game that has players spinning a giant wheel. When players spin the Cash spins Bonus wheel, they have a chance to win free spins. Not only can players win up to 12 free spins the stakes they bet are multiplied by 1. These spins can be re-triggered and could lead up to 60 more spins with all wins doubled. CashSpins could also lead to a revealed amount of cash that is added to the player’s account. The game credits that could be won during the CashSpin featured bonus round ranges from 200 to 20000. That win is for each spin, which means that it could add up to some very big cash for players betting the max.

The Money Vault Slot casino game has a wild symbol. The wild symbol looks like a giant stack of money with a mixture of green bills with some golden coins. The symbol says WILD on it so there is no mistake for what it could be. The wild symbol will replace all other symbols except for the other two special symbols of the game. The Money Bag scatter symbol is a very lucrative one. If players can have these bags land on reels 2, 3, and four, it will open up the feature game where players can pick from 3 different money bags. Each bag holds cash with amounts that are 3 to 50 times the amount of the bet placed on the round.

The bulging money vault is one of the highest paying random symbols found in the Money Vault Slot casino game. Players that land two of these symbols on two reels will be awarded a small sum of 20.00. Lucky players that can have 5 of them land on all reels they will win 2,000.00 for that one round. The second highest paying random symbol is the bundle of cash in a gold money clip. Players that have 3 of these land on the reels will see a cash increase of 200.00. If players can get 5 of the bundle of cash in a gold money clip symbols, they will win 1,200.00. The giant diamond symbol and the pile of coins symbol both pay a nice amount for spinning 3 or more of each on the reels. Other random symbols include the A, K, Q, J, 10, and even the 9. These also pay if 3 or more appear on the reels.

The Money Vault Slot casino game has the perfect theme of money. This theme is not only seen during game play on each reel but is also seen by players who hit big wins while playing it. The lack of pay lines enhances this game as it allows more ways that a person can win.