No Deposit Bonus » Fun facts » The luckiest players we currently know of!

The luckiest players we currently know of!

Have you ever thought about winning a jackpot while playing at your favorite online casino? Everyone at some point in time most likely has thought about it at least once. What would you do with the money? You would literally have the key to financial freedom, and that would unlock a whole new perspective of a life unknown to you. Today we’re going to be counting down from the top 5 biggest online casino jackpot winners in the history of the world. Haven’t you ever pondered exactly how much money was won by the person who holds the title of the worlds biggest online casino win in history? Stay tuned and you’ll find out exactly how much he won.

This winner has decided to remain anonymous, however the amount this player won has been disclosed by a mobile online casino company. On the 28th day of August, 2016, the worlds highest progressive jackpot on a mobile device was hit for $8.82 million. It is unknown to us where the player is from and how old he/she is. What we do know is that this player deposited only $1 in an effort to take advantage of an active online casino promotion titled “80 Chances to Become a Millionaire”. One thing is for certain, that this user is one lucky person to be able to turn $1 into nearly $9 million. I guess 80 chances to become a millionaire was enough for this winner! What would you do if you won this amount of money from a low $1 bet?

The fourth largest jackpot claimed in an online casino was for the amount of $9.57 million by a man named Alexander, who was playing online from the country of Sweden. On the 28th day of November, I’m sure Alexander became the luckiest man in the neighborhood in terms of coming into money. He probably quit his job or retired. Wouldn’t you do the same thing if you were Alexander? When he hit the jackpot he initially became speechless, and when he finally realized what had happened he reportedly woke up his sleeping wife to share the good news with. Most of us would have retired, quit working, bought a new house and car, but Alexander has decided to lay low with his online casino winnings. He says his goals are to finish paying for his home and to break some bread off on a new car. This particular online casino paid out more than $14 million in a two week time span at the time Alexander won.

The 3rd biggest online gaming win in the history of the world was made by a young man from Norway. Apparently the anonymous internet gambler was suffering from a nightly episode of insomnia, so he then decided that he would hop on the computer and dabble in a few games in an online casino he was signed up for. That was probably the best decision he had ever made in his life; because on September 24th, 2011 he won $12.8 million from a game. At the time, this Norwegian player set foot into the Guinness World Record book as someone who got to claim the largest payout ever made to a user from any internet casino. I bet he didn’t get much sleep after that! Well, as it turns out, he ended up not being able to get to sleep until around sunrise. The head operator of the online casino’s website also mentioned that it looks and feels great to have his game and casino in the Guinness World of Records.

We’re down to the final two biggest jackpot payouts in the history of the world! What do you think so far – it’s unbelievable, right? Well you better believe it because these are true stories and you could be the next jackpot winner without ever knowing it! This jackpot was hit on one of the most rewarding machines in any online casino, and it was for a massive $17.2 million. The winners name is Jonathon Heywood and he was playing from Cheshire, United Kingdom. On October 6th, 2015, a new world record was put into the record books as he stood there with an online casino account balance of over $17 million. Jonathon states something to the effect of not being able to grasp the fact that he just became a millionaire from a 25 pence bet. And here we are once again with another winner who doesn’t wish to live extravagantly, but instead use most of his winnings to aid his father who is ill. It doesn’t get better than that, right folks?

Number One Jackpot Winner in the History of the World

A middle-aged man from Finland is probably the exact definition of the word ‘luck’. This jackpot was awarded by an internet gambling site operating out of Scandinavia. Just like the majority of jackpot winners this lucky guy only had to make a 25 cent bet to win the largest jackpot ever paid to someone from an online casino. Not only did this man win an astonishing $24 million, but he put himself on top of the list for the worlds highest online gaming payout. That’s a lot of money!

Doesn’t it stand to reason that you’ll never get that lucky in a lifetime, but do you think these winners ever thought they would become multi-millionaires? If they hadn’t won they’d probably assume similar assumptions to us money-hungry jackpot chasers. So there you have it! You now know that it is possible to actually win those extremely large jackpot amounts we see building up one cent at a time. The next time you’re playing in your favorite online casino remember these folks who didn’t think it could happen, and play with hopes you’ll win, because you just never know! 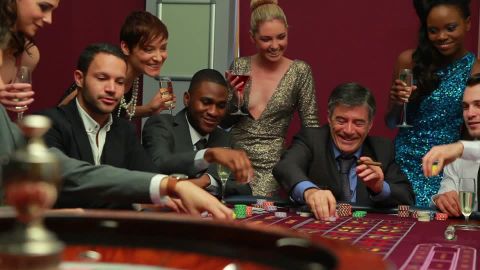